I decided I’d take a pregnancy test on Christmas morning.

For once, my early riser 3-year-old son didn’t rise early (not even on Christmas morning!).  I slipped quietly out of bed, the only one awake in the house, and walked to the bathroom.  The stillness of the morning was calming, and I just had this feeling.  After all the family had gone through with Mike’s almost 3-year cancer battle, I thought it would be just like God to grant us a new life.

After all, thirty years ago, after wanting a baby for years, my mom gave birth to me 10 months after she had lost her mother to cancer. I knew God had a way of working in ways like this.

Still, as I took the test, I tried to restrain my hopes for fear I would be disappointed.  Watching the control line turn a bright pink, I waited anxiously for the second line to darken.  Slowly, the line appeared faintly and then got darker and darker. I was pregnant!  I could hardly contain the joy I felt.  For that moment, there I was, on the quietest Christmas morning, just my microscopic baby and me.

At this moment, I felt God’s presence in an inexplicable way.  Not only had he blessed us with a child after waiting most of the year, but he had blessed us in his perfect time.

The month after we lost Matt’s dad. 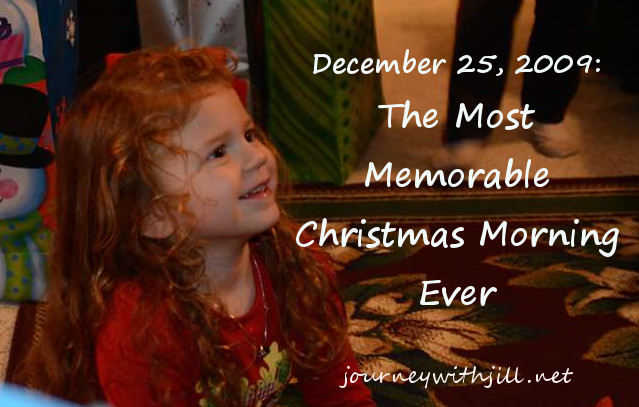 His timing was perfect on the first Christmas when our Savior Jesus Christ came into the world, and it was perfect in our little family on this Christmas morning 2000 years later.

The blessing didn’t end there, however. Two months later Matt’s sister Amber announced that she, too, was going to have a baby.  Both of us hoped for girls!  We both joked that her dad put in his request when he met Jesus because he wanted granddaughters so badly.  In April I had my ultrasound, and I showed the photos to Amber. It was a girl.  In June, I received the call from her after her ultrasound, and she said excitedly, “It’s going to be a very pink Christmas!”

And that, it was.  Alyssa Kaylin and Emma Grace arrived into the world in August and November, 10 weeks apart.  Our two little blessings remind us how much God loves us.  How he is involved in the “little” details of our lives.  How he brings beauty from ashes and hope from suffering.

Seven years later, anyone who knows Alyssa knows that her smile can light up the room just like Mike’s did. Her laugh is contagious, just like his was. God has a way of working like that. Someday we’ll be reunited with Mike because of our hope in the Savior who was born the very first Christmas.

Do you get overwhelmed with garden planning?

Subscribe here for my best tips to plan your garden in just 7 days -- all for FREE.

Plus, I'll send you my "In the Garden E-mail" on Fridays, periodic updates on garden resources relevant to you, and you'll receive access to my entire bank of free garden downloads!