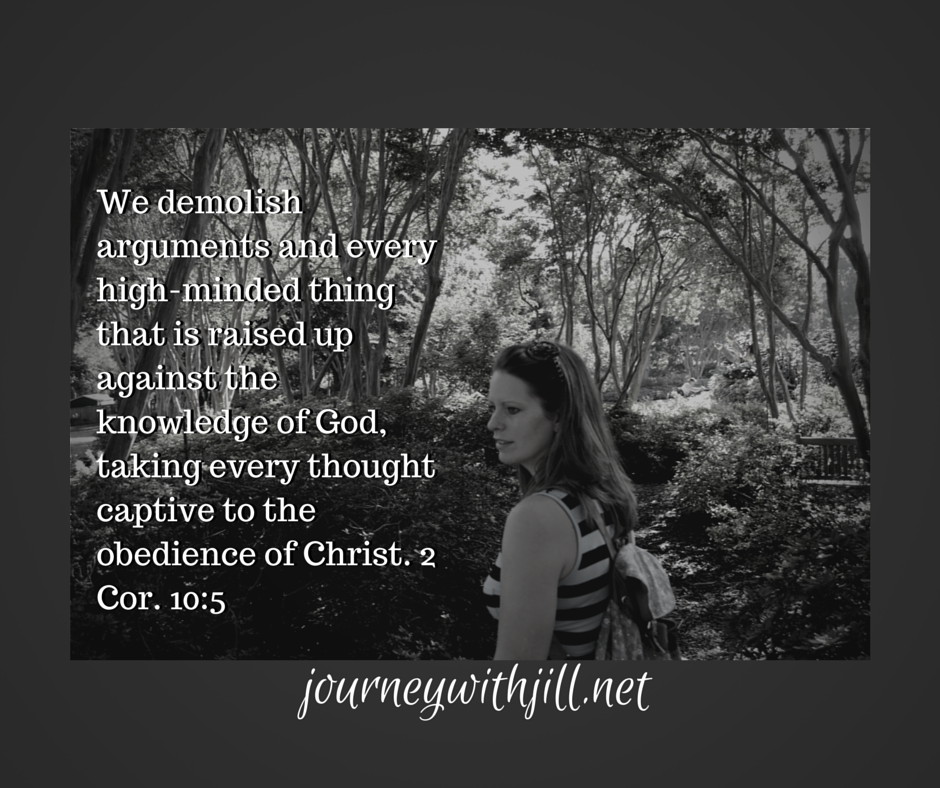 A battle was going on inside. On one side was the irrational, emotional side. This side was too sensitive and vacillated between anger and despondence. She wanted to crawl into her shell and shut the whole world out.

On the other side was the rational, logical side. This side saw the truth. She saw the big picture. She saw the possibilities of how God could use this, not only in her life, but in the lives of others.

For a moment, it looked as if the emotional Jill was winning. Tears fell. A desperate text was sent to a friend asking for prayer. She was drowning in her own emotions and couldn’t see how to get out.

But then the rational – the Spirit-filled – Jill dealt a crushing blow to the emotional – natural, sin-sick – Jill. Rational Jill reminded Emotional Jill that she’d been here before.

Despondent. Depressed. Worried. And in the end, God won the victory. Ugly pride was taken down and humility took its place. A relationship became sweeter, a beautiful picture of grace. It took the pain to get there, though, and Rational Jill reminded Emotional Jill that it was all worth it.

Yes, God would use this for good.

Finally, I could see a little glimmer of light. What happened next is a beautiful example of the power of Scripture and the power of God.

Studying in Psalms lately, I thought about how many times David refers to his enemies. Under normal circumstances, it’s hard to relate. Oftentimes I’ve thought, this would be a very encouraging psalm for a soldier. But I had a hard time relating it to myself.

Then I saw it.

I have enemies, too. And these enemies had been assaulting my heart and mind for the past 24 hours.

Every time anger would rise up, it was an enemy.

Every time bitterness would begin to take root, it was an enemy.

Every time I began drowning in the “woe is me” mentality, it was an enemy.

Every time I would begin making suppositions that had no basis in fact, it was an enemy.

Every time I wanted to crawl in a shell and never make myself vulnerable again, it was an enemy.

So what was I to do with these enemies – many of which originated from the sinful desires that raged within me?

As quickly as I asked the question, this Scripture came to mind:

“We demolish arguments and every high-minded thing that is raised up against the knowledge of God, taking every thought captive to the obedience of Christ” (2 Corinthians 10:5 ESV, emphasis mine).

In wartime, who is taken captive? The enemy!

It was at that moment that I knew what to do. Every thought that came to mind I must evaluate. And if it turns out to be an enemy, I must take it captive! I cannot let it have free reign in my heart and mind.

The cause of my distress has not been completely resolved, but my heart is at peace. I’m open to the Lord’s guidance in the situation and my heart is soft and open. But I know the war is not over. However, now, I’m fighting it on the right side instead of drowning in a sea of despair.

Were you encouraged by this post? Get a month of encouraging devotionals in Glory in the Garden: 31 Days of Devotionals. For a free download, click here. But hurry! The free download is only available through December 21st. Also, the paperback is available on Amazon here.

Share on FacebookShare on TwitterShare on PinterestShare on LinkedInShare on Email
Previous Post: « Moving Forward Begins with Letting Go
Next Post: 12/25/09: The Christmas Gift that Changed Everything »