“You’ll work on this project in groups.”

Those were the words I dreaded in college. UGHHHHHH! Why can’t I just get it done myself?  I gritted my teeth during every management/marketing class I had, thankful that my major was psychology, where groupthink wasn’t a priority.

Since college, my mindset has continued along the lines of, “If it’s going to get done, I have to do it.” That’s one reason I was very confused when I felt God leading me to give up my position as Sunday School Director at my church after only serving for a year.  I had just gotten started and I was enjoying what I was doing.

But in many gentle whispers, I knew God was prompting me to make space in my life to be available to invest in those around me in a more concentrated manner. If a new Christian needed discipled, I wanted to be available to have a regular Bible study time with her. If a friend needed to talk, I wanted to have enough room in my schedule to drop it all for her and my other commitments not go crashing to the ground.

So in that effort to create this margin in my life, I knew God was prompting me to cut back on a few of my commitments. But my biggest concern – and why I didn’t officially resign quicker – was that I was afraid “no one” would step in. Our Sunday School was growing and I didn’t want to leave it hanging.

Little did I know, God was working on another woman in the church, a woman I love and respect immensely. When I confided in her that I felt led to step down, she began feeling God’s nudging to step up.

I watched the fire in her eyes yesterday as we discussed turning over the leadership. Her passion for Sunday School eclipsed my own exponentially. It was almost as if God whispered to me in that moment, “It all doesn’t depend on you, Jill.”

I don’t think God was done driving home his point when this morning I received a text from a friend who was struggling asking me to pray for her. All I wanted to do was drop everything I had planned for today – which was hours of garden work on this last 70 degree day until winter moves in tomorrow – and have coffee with her.

I was about to offer, when I received a text from a mutual friend offering the same thing (the first friend had sent a group text and I was unaware of it). Again, God reminded me – even in the specific area I had felt him leading me to be more available – “It doesn’t all depend on you, Jill.”

Had I not followed God’s promptings and stepped down as Sunday School Director – and stayed because I felt no one else would do it – I would have robbed someone else of the blessing of serving. I would have continued my frantic pace, unable to minister to those who needed me.

Not only did God teach me that it all doesn’t depend on me, he taught me to listen to his gentle whispers to guide me in the smallest of details.

What about you? Have you struggled to step down – or not say yes to something – because you were afraid no one else would do it?

Coming in two weeks!!
Glory in the Garden: 30 Days of Devotionals
FREE e-version for e-mail subscribers! 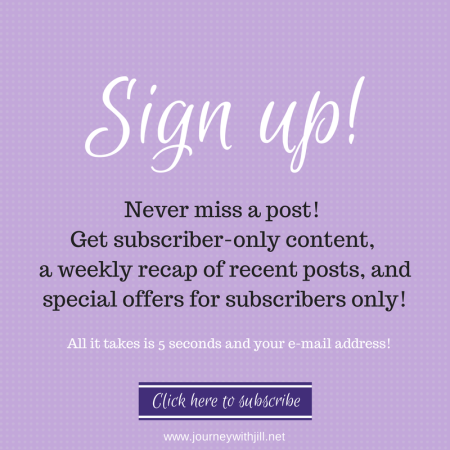 Click the link above to receive Glory in the Garden for free when it is released in late November!
*The paperback version will also be available – a great Christmas gift!*

Share on FacebookShare on TwitterShare on PinterestShare on LinkedInShare on Email
Previous Post: « Two Years
Next Post: Sometimes It Does Depend on Me + 6 Ways to Serve In Your Church »