Drew and his friend one of the first days he began to move around.

One week ago, my husband and I were watching a movie like any ordinary Saturday night.  As the credits rolled, we heard an odd sound from my 7-year-old son’s metal loft bed. We both looked at each other in puzzlement, and before we knew it we heard the most horrific sound. We knew our son had fallen the six feet to our concrete floor.

Drew was crying, and we first checked his head.  Seeing nothing, I sat down and scooped him up in my lap to comfort him while we continued to check for injuries.  As I scooped him up, my hands under his legs, I gasped as his left leg didn’t provide the resistance in my hand that his right leg did. I knew his leg was broken.

Having never had an emergency of this sort before, we were stunned and momentarily paralyzed. Do we call 911? Do we take him to the ER ourselves?  What do we do with Alyssa, our sleeping 3-year-old?  We decided since we live 15 minutes out of town that we’d get to the ER quicker than an ambulance could get here and back. Whether that was true, I don’t know, but we went with it. I scooped up a confused and bleary-eyed Alyssa and placed her in her car seat, while Matt placed Drew in the back seat with his leg propped up on my lap.

The ER team worked to get Drew comfortable right away.  The nurses calmly talked to Drew, keeping him coherent and as calm as was possible.   We awaited for confirmation from the x-ray that Drew’s femur had broken in half.  Within a couple of hours, we were transferred to Arkansas Children’s Hospital.

While we were at the local ER, thoughts invaded my mind, thoughts that surprised me.  One of the first was a deep gratefulness that we have access to medical care.  On the heels of that thought was the reality that many families in the world do not. I shuddered to think what a mother in a poverty-stricken country would feel like if she saw her child in pain like I saw Drew in pain but had no access to medical care.  Crazy to be thinking while standing at Drew’s bedside, I know, but I’ve been reading a lot of Jen Hatmaker lately, and she’s gotten in my head.

The second thought was how grateful I was for the kind and capable hands my son was in.  Both in our local ER and in Arkansas Children’s Hospital, I saw health care workers in a new light.  We were absolutely dependent on them in those moments, and I was beyond grateful.

After a long sleepless night in the Arkansas Children’s Hospital ER, we met with the orthopedic surgeon, who explained that Drew would have surgery, placing two flexible titanium rods inside his femur.  This would keep the bones in place while they healed together.  Drew would need no cast and would be back to normal in 4-6 weeks. 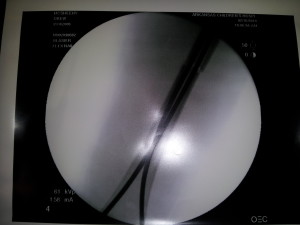 X-ray of Drew’s leg with titanium rods inserted. You can see the break in the femur at the top right part of the image.

During surgery I was pretty calm.  I was in more of a what-do-we-do-next mode, focused on comforting Drew and providing for his needs.  Occasionally during the quiet moments I would have flashbacks to Drew’s fall, but I was constantly thinking about how much worse it could be. He could have fallen on his head. He could have crushed his hip.  I also knew that Drew would get better, an assurance that many other mothers in ACH didn’t have that night.  Counting my blessings wasn’t hard.  We had so much for which to be grateful.

When we got home, reality began to sink in.  The first two days, every time Drew had to go to the bathroom, it was a 10-minute, cry-filled ordeal. He was in so much pain. After the third day, I began to wear down.  Following a particularly difficult bathroom run where I inadvertently caused Drew more pain than I realized, I began to crumble.  I cried and cried and couldn’t stop.  I labored to study to teach my lesson at church that night but couldn’t dry my tears.  That’s when I realized I was in no condition to teach my class!  Thankfully, even though church began in 3 hours, my friend Heather agreed to take over my class for me.  My mom came and picked up Alyssa for church, and Matt was at work, so it was just Drew and me that evening.  That was when things began to turn around and we had a successful bathroom run – zero tears.  He began to make progress slowly and I began to come out of my funk.

Drew asked me why God allowed him to be born since he knew he would break his leg.  I knew what he was really asking was, “Why did God allow this to happen to me?”  Fair question, but I was prepared because I had been thinking of all the good that would come out of this traumatic time myself.

When you go through something like this, your eyes are opened.  Drew knows how lonely he was but how each and every visitor brought him a smile.  He felt loved with each card, balloon, cookie, or toy sent.  I saw his eyes light up every time I read him a text from his teacher or an email from a friend or family member.  We realized how precious the meals delivered to us from church friends and family were.  The support and love we received carried us in those days.  Drew and I learned in a tangible way how we can minister to others who face similar situations.  Hopefully we will take what was given to us and give it back when we see others in need in this way.

We still have a long road ahead of us until Drew is back playing soccer and helping in the garden. This week has tilted our world off its axis a bit.  But in the midst, we learned.

We learned the power of those praying for us when we couldn’t find the words.

We learned how to look at all the blessings in the midst of adversity.

We learned how just a simple email can make someone’s day.  Or text. Or phone call. Or card. Or visit. Or meal. Or hug.

More than anything, we learned what love looks like in action.  For all of you who were love to us this week, thank you.

And may we take that love and be love to others.

Thank you for reading! If this is your first time to visit Journey with Jill, I’d love you to join with me on my journey. My posts are typically on devotionals about Scripture, my walk with God, my family, and gardening. Click here and enter your email address to have each post I write emailed directly to you (usually about once or twice a week), plus exclusive content for subscribers. You can even choose which subjects you receive in your inbox. I’d be honored to share my journey with you!