I’m a big fan of superhero movies. One of my favorites is Captain America: Civil War. Zemo, the villain in the movie, tries an ingenious tactic other bad guys had not: “I knew I couldn’t kill [the Avengers]. More powerful men than me have tried. But if I could get them to kill each other…An empire toppled by its enemies can rise again. But one which crumbles from within? That’s dead… forever.”

Though superhero movies usually end happily ever after, we can see that this tactic is destroying relationships all around us. And it’s not new.

During the time in which the book of Acts was written, the government of Rome controlled the region in and around Jerusalem. It was the Roman centurions’ responsibility to keep the peace, and they had their hands full with this new movement of Christianity. Perplexed as to why the Jews are so violently upset with Paul, the local commander brings the Jewish rulers together to question him.

The conversation begins badly and Paul decides to turn to a surprising tactic. Instead of debating with his fellow Jewish leaders, he sees an opportunity to turn them against each other. The two principal factions — the Pharisees and Sadducees — have certain disagreements with each other. Paul, formerly a Pharisee himself, is only too familiar with these problems. With well-chosen words, he plays upon this reality to take their attention off of him and onto their hostility with each other.

I wonder what the Roman commander and the Roman soldiers witnessing this free-for-all are thinking. This people claims to worship the one true God, Creator of heaven and earth, and all they do is argue like children. Witnessing their behavior would certainly keep me from being tempted to follow either one of them. Right?

Sadly, infighting among Christians have the same effect on those on the outside. It has proven such a great tactic for our enemy that he uses it time and again. And we fall for it. What’s the result? People, like these Roman soldiers, look on and shake their heads, wanting nothing to do with our God. We play right into the enemy’s hands when we choose discord over unity.

We may not be able to fix the larger divides of Christianity, but we can make a difference in our own sphere of influence. We can choose to sow seeds of unity and not discord, whether it’s what we post on social media or what words we whisper behind closed doors.

How can you effect change in your world—especially as it relates to Christianity? In what relationship or situation might God be speaking to you in this area? 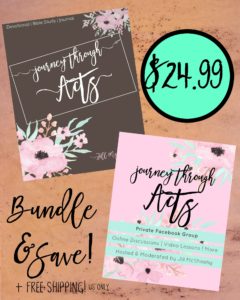 This devotional was taken from my Bible Study, Journey through Acts. Starting Monday, January 16th, I will begin posting weekly videos on the Journey through Acts Facebook Membership Group as a supplement for those of you who are working through the study.

Haven’t gotten your copy yet? I’ve created a bundle for both the book and the membership for only $24.99. Click here to order. If you would like to only purchase the book, or if you have purchased the book and would like to join the Facebook group, click here.

Share on FacebookShare on TwitterShare on PinterestShare on LinkedInShare on Email
Previous Post: « Preparing for Farewell
Next Post: A Reflection on 2016: the Year of Loss (plus my most-read posts on faith, family, & garden) »