It amazes me how similar the modern church is to the early church. Take, for instance, the appeal of Christian “celebrities.” Women flock to hear established Bible teachers like Beth Moore, and we clear our calendars to hear a word of encouragement from Lysa TerKeurst.

Sometimes we’re tempted to judge others based on who they follow. But all too quickly, following and identifying with a person a little too closely inevitably leads to divisions.

In Acts 18, Paul has just left Corinth, where he had evangelized and established a church there, discipling these believers for over a year.

Shortly after he leaves, Apollos — a newcomer on the evangelistic scene – arrives and begins to carry on the ministry Paul began. Though Paul and Apollos preach the same message, divisions begin to form, and the members of the church start identifying themselves with Paul or Apollos, to the point of contention. These divisions and rivalries become disruptive in this young church.

Consider how Paul himself addresses the issue in his letter to the Corinthians:

For whenever someone says, “I’m with Paul,” and another, “I’m with Apollos,” are you not unspiritual people? What then is Apollos? And what is Paul? They are servants through whom you believed, and each has the role the Lord has given. I planted, Apollos watered, but God gave the growth. So then neither the one who plants nor the one who waters is anything, but only God who gives the growth. –1 Corinthians 3:4-7

Are we really so different, then, from those early believers in Corinth? Do we find commonality with other believers if they like the same Christian leader or preacher? Do we dissociate from or judge believers who follow someone we don’t care for? Are we depending on the message coming from our favorite Christian celebrity instead of searching the Scriptures ourselves? 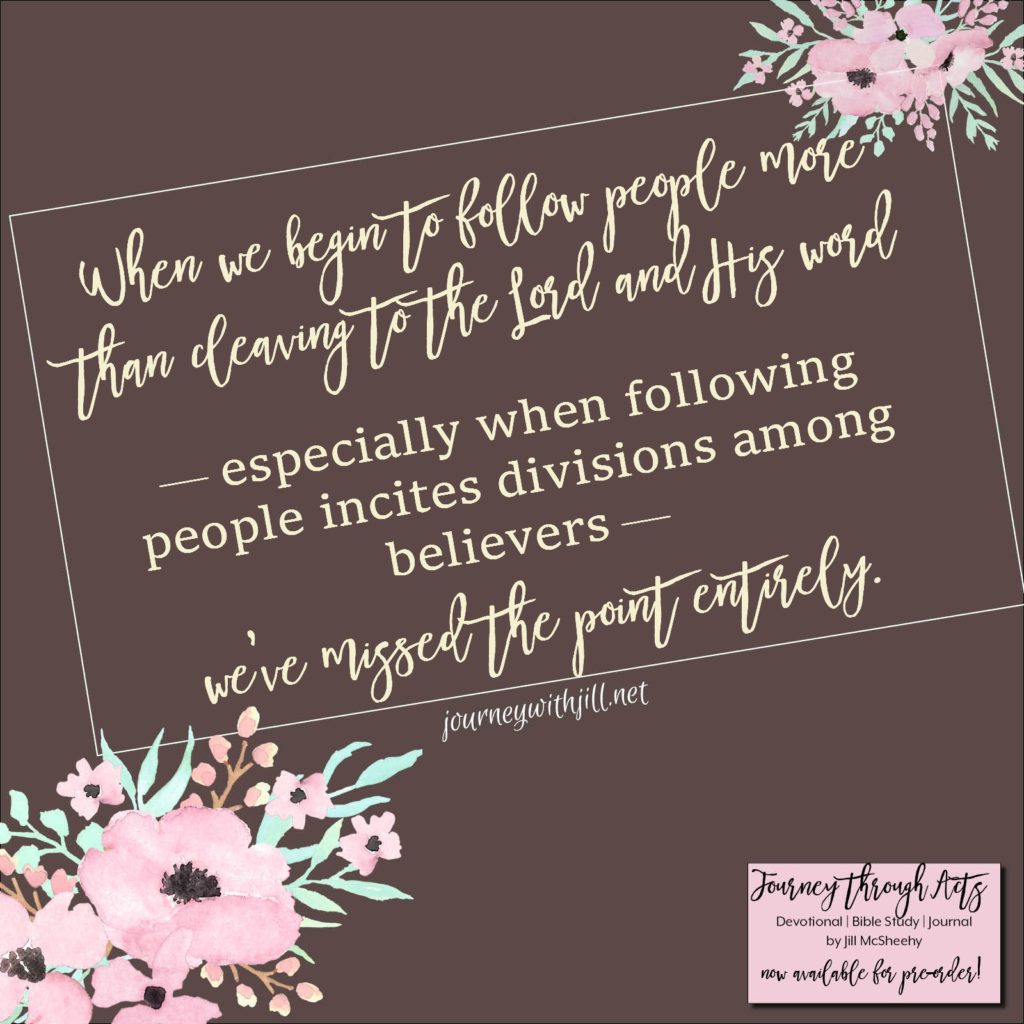 In these first four chapters of 1 Corinthians, Paul reminds us that leaders are just people, coworkers like the rest of us; the foundation of our faith is Christ. When we begin to follow people more than cleaving to the Lord and His word — especially when following people incites divisions among believers — we’ve missed the point entirely.

Is there a Christian leader you follow a little too closely? Is who you follow (or don’t follow) promoting division between you and another believer? Who should we be following instead? How about Jesus? That’s one we can all agree on!

Today’s post was taken from my Bible Study, Journey through Acts, now available for pre-order. Click here to order, and use code EARLYBIRD15 to get 15% off and free shipping in the US. Estimated ship date is Dec. 15th.

Share on FacebookShare on TwitterShare on PinterestShare on LinkedInShare on Email
Previous Post: « Begging for the Red Ink: on humility and accepting critcism
Next Post: When Your Loved One is No Longer on Your Christmas List »