Tugging at the weeds surrounding my blueberry bushes, my mind was in a half-praying, half-worrying trance. Perhaps you would call it “lamenting.”

The more I lamented the more worked up I became; no solution rose to the top. Instead the murk kept churning, pessimism beginning to vine its way around my thoughts, choking out the optimism desperately seeking to keep hold.

Do you know the feeling?

A whistle snapped my attention back to reality. I looked to see my husband on his tractor toward the western horizon where the sun had just begun to set. He pointed to the sky behind me in the east.

Turning to see the most beautiful rainbow in the dusk sky, I looked closer and saw not one, but two rainbows. An orange-pink glow lent a uniqueness to the sight, like a banner over our property, over our home, over me.

The dreamer I am, I supposed it was just for me. God heard my lament, felt my anguish, and He was reminding me of His faithfulness. So He sent a rainbow in this rainless sunset sky to get my mind out of the doldrums and back to up to Him.

After taking it all in, I returned to my garden and began plucking blueberries off the bushes, the stragglers of this year’s harvest.

As I plucked each ripe berry, I willed my mind to fixate on God’s faithfulness.

Not What I Signed Up For

But here I was, wandering, with the Presence of God having never left me, yet complaining about all I was missing back in Egypt.

An unbidden question surfaced in my mind: Am I more interested in God’s solution to my problems or His presence within them?

Was the Presence of God not enough for me? Apparently not, at least not by the tone of my lament. I want Canaan and I want it now. This wandering in the wilderness is lonely, pointless, and a waste of time.

I’ve been in what I’d call a wilderness a time or two, and I bet you have, too. You’d think I’d know better by now. 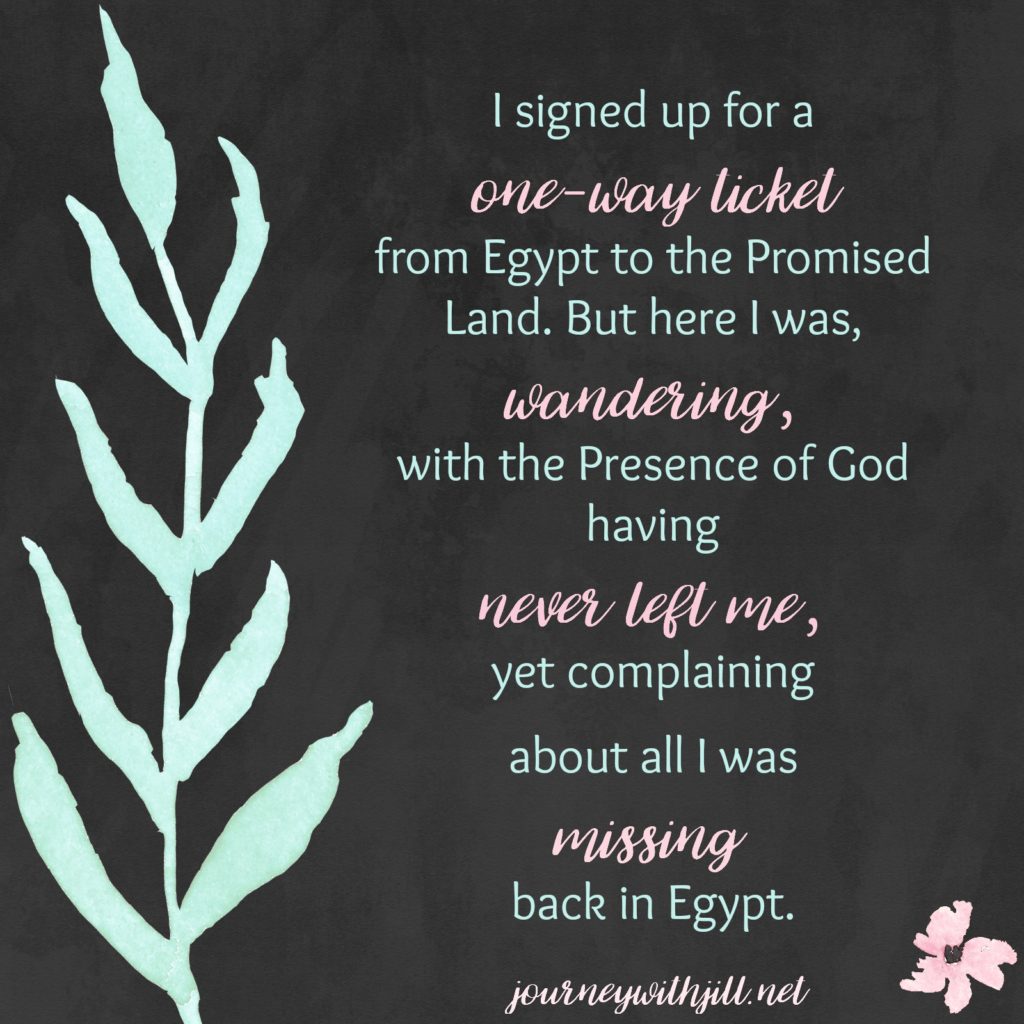 Purpose for the Wilderness

I began to consider one of the purposes of God not bringing the Israelites directly from Egypt to Canaan. Even before their rebellion, God had led them on a roundabout route. He wanted to draw them to Himself in the wilderness. He needed them to know that He was enough, that He would provide each day exactly what they needed.

Unlike the Israelites, God saw what awaited them in Canaan. It wasn’t simply a land of milk and honey. It was also a land of enemies and false gods. His people needed an intensive boot camp with the General before heading into a war for which they were not prepared — not just the physical battles but the war in their hearts and minds to stay faithful to their God.

Ultimately, they needed to know that God was enough before they were tempted to worship the idols of the land.

Trusting Him, even in the wilderness

And so, in this wilderness I found myself in that day, I decided I didn’t want to be found in the company with the unfaithful Israelites who complained at every turn when things weren’t going the way they expected. I decided to use that time to draw near to God and allow Him to train me for what He had in store.

He has always been faithful. He hadn’t forgotten me. The wilderness wasn’t a waiting room for me to bide my time until God called my number. It was the purposeful and intentional work of a faithful and loving Father whose plans for me and my role in His kingdom is much more than I could ever ask or imagine.

Share on FacebookShare on TwitterShare on PinterestShare on LinkedInShare on Email
Previous Post: « When Something is Not Quite Right
Next Post: I thought it was a noble desire, but I was wrong »