“It just doesn’t feel like Christmas this year.” My mom’s even voice carried no hint of the sorrow she must have felt. We discussed Christmas gifts and my own preparations for two family Christmas meals at my home this year. Usually we traveled to my aunt’s home, but my mom’s weakness necessitated our changing the venue.

The next day Mom would go to have a MRI on her brain to see if the radiation surgery worked on her earlier tumors, and to see if new ones had developed. Due to her unexplainable downward spiral, we feared the worst.

Peace on earth? This Christmas?

I pondered the first Christmas when angels heralded, “Peace on earth” with the coming of Jesus. 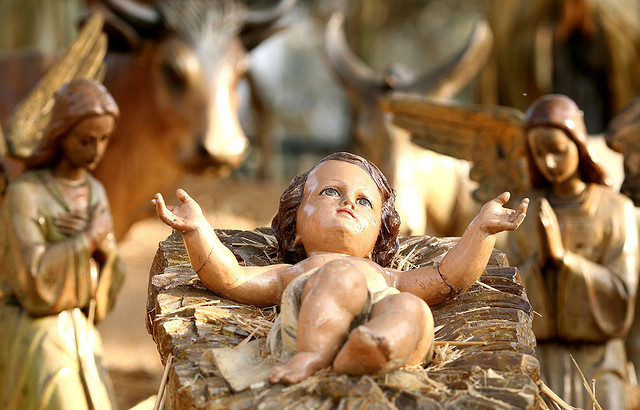 But, despite the thoughts of silent nights and serene nativities, the earth wasn’t peaceful when Jesus came. The swelling, aching, exhausted, child-woman Mary endured a harsh trek to Bethlehem simply because Caesar Augustus wanted everyone counted — so he could exact heavy taxes on the already conquered and oppressed.

Thirty years later Jesus endured an excruciating death at the hands of both His own people and foreigners. God with us impaled on a cross, a far cry from the Messianic kingdom God’s people hoped for in their Messiah.

But if we look at Luke 2:14, we see the peace the shepherds actually proclaimed:

Glory to God in the highest heaven, and peace on earth to people He favors!

The peace Jesus offers now isn’t peace on earth but instead peace to His people.

This peace I could hear in my mom’s voice as she said it doesn’t feel like Christmas. It doesn’t waver despite the unrest and uncertainty surrounding us.

It’s an assurance in knowing our true heart-calm comes from being at peace with the God who created us. The God who became Immanuel — God with us — and took our sins upon Himself and intercedes for us in the presence of the Father (Hebrews 7:25).

This peace? It’s available to everyone on earth. We only have to believe in Jesus Christ for the forgiveness of our sins (Acts 2:38). Those who believe? Those are the one God favors.

Those are the ones who know this peace.

It may not feel like Christmas as much this year. Mom had to do most of her shopping online instead of browsing in stores. She didn’t have the strength to put up a tree. We won’t be making our yearly trek to Aunt Becky’s house. We may get some difficult news on December 23rd.

But peace will reign. Because of Jesus. He gives indescribable peace eternal within our hearts that can’t compare to what our finite minds would fathom peace on earth to be.

Update: Mom had a brief surge of energy just in time for Christmas. We enjoyed a wonderful Christmas together. Shortly after the new year, she began weakening at a rapid pace, and in February we called in hospice. Mom passed away on March 24th, but I’m so grateful for that last Christmas we had together. I can still picture her raving about how delicious my lasagna was. Though I miss her dearly, I’m at peace — and so is she.