In August 2004, I lost one of my best friends in the war in Iraq. As Memorial Day weekend approaches and you’re inundated with Memorial Day ads and hype, I hope you’ll remember Michael and thousands of others who gave their lives for our country. As we are seeing increasingly worldwide over a decade later, freedom isn’t a given, and it comes at a cost.

I blinked at him from across the desk, realizing that my protests would do no good. The decision had been made.  The General Sales Manager for the dealership informed me that for the first time in the fifty-year history of the company, we would be open on Memorial Day.

I couldn’t tell if I felt sadness or anger.  And it wasn’t about having to work on Memorial Day.  It was about capitulating to the commercialization of the holiday when the nation honors its fallen soldiers.

And for the first time in my life, one of those fallen soldiers had a name.

Not Just Another Fallen Soldier

Michael. We met when I was in fourth grade and he was in third.  We went to church together in a small town, and several of us became quick friends.  Sure, we went through that kid “going-out” thing in sixth grade, but then I broke up with him the summer after my sixth grade year because I was going to be a big seventh grader and was clearly more mature than he was.  As we grew into teenagers and adults, that was always the running joke.

Despite his family moving to Kansas my tenth grade year when his father became a pastor, we kept in touch through both high school and college.  He fell in love with the girl he would marry, and they wed just one week before Matt and I did.  I chose him and Caleb – my best buds growing up – to be ushers in my wedding.  And that was the last time I saw him. 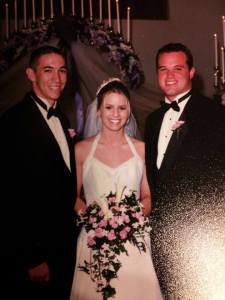 Michael, who always had a love for all-things-military, continued in the Army after he graduated from college.  A second lieutenant, he deployed to Iraq in early 2004.

My husband and I pulled into our driveway on a hot August day after having been on the most perfect Caribbean cruise. Strangely, Matt and I were greeted by my mom and my mother-in-law.  I thought it was odd that they were welcoming us back, and I could tell by their somber looks that something wasn’t right.

They told me Michael had been killed.  Those moments etched into my memory, as are many of the events in the days and weeks afterward.

People packed our hometown church, spilling out into the fellowship hall and even outside for Michael’s memorial service. Memories ran through my mind like a never-ending train. On the flower-covered steps to the stage, I remembered us listening to the children’s sermons together. My eyes wandered to the pews where we sat when it wasn’t cool to sit with our parents anymore; now those pews were filled with his extended family. And above his casket on the stage, I recalled Caleb and I singing Friends while our eyes burned before Michael moved almost a decade ago.

On the never-ending caravan to the cemetery, people stopped on the side of the road and saluted while the processional went through.  Those good people must have stood with their hands to their foreheads for at least a half hour.  At the gravesite I heard Taps for the first time with meaning. I still can’t hear it without crying, thirteen years later.

Michael was so dearly loved by so many. But as his childhood buddy – and a married woman – I felt alone in my grief. But truly his death was the first time I had experienced grief in my young 24-year-old life.  He was like a brother to me.

He called to congratulate me when my beloved Braves won the 1995 World Series — even though Cardinal blood ran through his veins.  He showed his witty sense of humor when he wrote me a silly poem years after the sixth-grade break-up: “Roses are Red, Violets are Blue; I wish I was as mature as you.” He taught me that we shouldn’t say we love baseball or anything other than people because that cheapens the word. He showed me by example how to believe the best in people.  In his last email to me from Iraq he shared that he was trying to share Christ with a comrade. 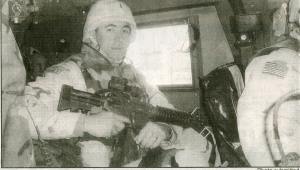 Not Just Another Holiday

So when our dealership opened for the first time on my first Memorial Day after Michael’s death, I was angry.  In fairness to the company, though, had we chosen to open the year before, I know I would not have felt the same. Just a couple of years before, I created Memorial Day advertisements for the local newspaper without blinking an eye.

Before Michael died, Memorial Day was a day for family and grilling out, to be on the lake or in the pool.  And of course the cursory remembrance of faceless fallen soldiers.

Not anymore.  Every Memorial Day I tell my kids about Michael, and I show them his photo in uniform and at my wedding.  I want them to enjoy the family day, the grilling out, and the swimming, knowing that we can enjoy it because of men and women like Michael who sacrificed their lives fighting for or protecting our freedom.

August 15, 2016 was the twelfth anniversary of Michael’s sacrifice.  A street in our hometown was renamed in his honor, and I had the privilege of attending this touching ceremony. A Facebook page was created in his memory here.

Read his sister Mandy’s beautiful and raw words about her brother’s death here and here. I just love Michael’s family.

Share on FacebookShare on TwitterShare on PinterestShare on LinkedInShare on Email
Previous Post: « Don’t Give Me a Recipe. Teach Me to Cook
Next Post: Why God Didn’t Remove My Pain »