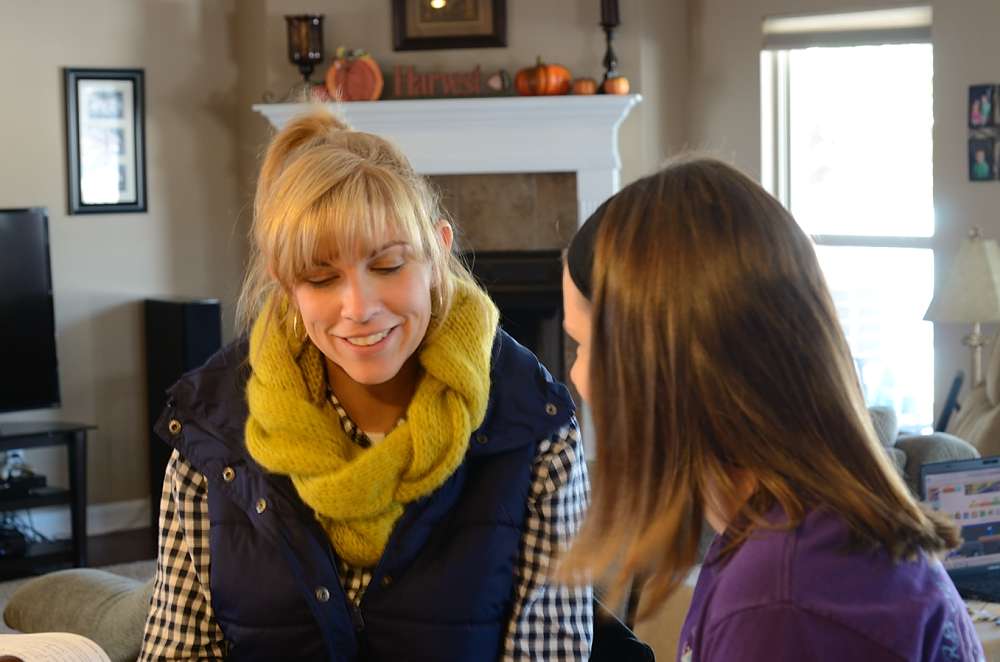 I felt like I was drowning in my emotions and I couldn’t seem to make sense of them. I needed my friend. I knew Tiffany would have the patience to let me lay it all out and then would help me sort through my emotions. She’s good like that.

I expected Tiffany to tell me what I needed to do. Instead, after my soliloquy her lovingly blunt response took me by surprise. “Jill, you need to stop listening to everyone else. Seek God and listen to what he has to say, and that’s your answer.”

I didn’t embrace her advice immediately. I guess I don’t want to ever assume I’m above others’ opinions and perspectives. But that’s not what she was telling me to do. She was encouraging me to trust by seeking God’s wisdom first and most importantly.

I awoke the next morning desperately wanting to stay in bed. But I pulled myself out of bed anyway, brewed myself a cup of coffee, and sat down to read my Bible. As I opened to 1 Samuel, I thought, “This is just another narrative of an event of David’s life. I need to know it but I doubt I’ll get anything from it today.”

Boy, was I wrong. I had to read it twice before I “got it” though.

How God spoke to me in this passage was so clear, so intimate, so perfect to my struggle. To get the full understanding of where I’m going here, I’m including the text for you: (I’ve underlined and placed in bold the important parts.)

It was reported to David: “Look, the Philistines are fighting against Keilah and raiding the threshing floors.”

So David inquired of the LORD: “Should I launch an attack against these Philistines?”

The LORD answered David, “Launch an attack against the Philistines and rescue Keilah.”

But David’s men said to him, “Look, we’re afraid here in Judah; how much more if we go to Keilah against the Philistine forces! ”

Once again, David inquired of the LORD, and the LORD answered him: “Go at once to Keilah, for I will hand the Philistines over to you.” Then David and his men went to Keilah, fought against the Philistines, drove their livestock away, and inflicted heavy losses on them. So David rescued the inhabitants of Keilah. Abiathar son of Ahimelech fled to David at Keilah, and he brought an •ephod with him.

When it was reported to Saul that David had gone to Keilah, he said, “God has handed him over to me, for he has trapped himself by entering a town with barred gates.” Then Saul summoned all the troops to go to war at Keilah and besiege David and his men.

When David learned that Saul was plotting evil against him, he said to Abiathar the priest, “Bring the ephod.”

The LORD answered, “He will come down.”

Then David asked, “Will the citizens of Keilah hand me and my men over to Saul? ”

“They will,”  the LORD responded.

So David and his men, numbering about 600, left Keilah at once and moved from place to place.  When it was reported to Saul that David had escaped from Keilah, he called off the expedition. David then stayed in the wilderness strongholds and in the hill country of the Wilderness of Ziph.  Saul searched for him every day, but God did not hand David over to him.  (1 Samuel 23:1-14, emphasis mine)

I placed in bold the phrase that first caught my eye the second time David inquired of the Lord, “Bring the ephod.” I knew that the ephod was a garment to be worn by the high priest when he went into the Lord’s presence, but I really didn’t understand the significance of why David would have made a point to obtain it since he was not a priest. And why would he seek the ephod when inquiring of God one time but not the other?

As I read through the passage a second time, I realized what God was showing me was not in the ephod but in the enemies.

In this passage we see David inquiring of God regarding two enemies. The first is the Philistines, the Gentile people who were at war with God’s people. David had had success against the Philistines, beginning with his defeat of Goliath when he was just a boy. It was also the Philistines he conquered as a military fighter that caused the people to sing about him, “David has slayed his tens of thousands” (1 Samuel 18:5-7).

His second enemy was Saul, the King of Israel and David’s father-in-law, who in his jealousy of God’s hand on David, was seeking to kill him.

The Philistines, David had conquered, time and again. Saul, he had escaped from but had never overcome.

With both enemies, David inquired of God for guidance. But there was a difference in how David approached God with each enemy. With the Philistines, David came as he was, with confidence, talking to God as a friend. With Saul, you can almost feel the terror in his voice as he approached God. He seemed this time not to be confident enough to approach God as he was. He sought to have the priestly garment brought to him before he inquired of the Lord.

Not long ago, Tiffany observed that in my times of needing to talk to her and process my emotions, not once had I needed her regarding my mom’s cancer diagnosis and illness. At first I was ashamed at that. Shouldn’t my mom’s cancer leave me crumbling?

But the truth is, as awful as the cancer is, as much as my fears threaten to overwhelm me, I trust God with my mom. He has proven faithful and I know he will continue to be, no matter what the outcome is, even if he allows pain that I can’t comprehend right now. This enemy of fear for my mom’s health has been conquered over and over again. Sure, just like the Philistines, it comes back. But it has been conquered each time.

Like David, my approaching God with this enemy hasn’t been enough. I continue to let opinions of others be that “extra” thing I add when seeking guidance. And just like that ephod, being open isn’t bad or wrong. There’s a place for it. But it doesn’t need to come before I approach God.

Instead of giving me another opinion – a metaphorical ephod – Tiffany stepped aside and pointed me to God and reminded me of my faith that has been able to triumph over other enemies.

God is calling us to come to him first and with nothing attached. “Just as I am.”

What about you? Do you have a persistent enemy that you’ve escaped from – or God’s even delivered you from – but it hasn’t been fully conquered in your life?